You can destroy wood and brick, but you can’t destroy a movement.

What can I even say about The Hate U Give? It was stunning, emotional, hard-hitting, powerful, a modern day classic. It deserves every piece of acclaim it received in 2017, every single award it won, a movie deal, and the title of ‘The Book of 2017′.

Inspired by the Black Lives Matter movement, THUG articulately captures the complexity of such a movement. Anger. Heart-rending grief. Joy. Fear. Disgust. Hurt. Love. Angie Thomas takes all of this, breaks it down, and displays it for all to see… plain as day. Told from the point of view of 16-year-old Starr Carter as her life is thrown into tumult after she witnesses the murder of one of her closest friends, Khalil Harris, by a police officer, THUG shows the heartbreakingly ugly reality of racism in America in a way that really puts it into perspective for readers.

Khalil Harris – an unarmed 16-year-old black male is killed in front of Starr after being pulled over by a white police officer and is shot three times for having a hairbrush in his car door that looked like a gun. Starr struggles to speak out for fear of her safety and the safety of her family but finds that, with the support of others, she is able to tell the real story of what happened that night, that Khalil was not aggressive towards the police officer, that he was unarmed, that they weren’t doing anything wrong – just driving home, in the hopes that by doing so she could bring the police officer to justice.

“People like us in situations like this become hashtags, but they rarely get justice. I think we all wait for that one time though, that one time when it ends right. Maybe…”

Unfortunately, like Trayvon Martin, Jordan Edwards, Eric Garner, Michael Brown, Emmett Till, Tamir Rice, Sandra Bland, Alton Sterling, and so many, many others whose lives were stolen in the blink of an eye at the hands of the police, Khalil’s murderer is not brought to justice.

As a white reviewer, there are much, much better reviews than I will ever be able to write about The Hate U Give and I would really encourage you to go read some reviews written by reviewers of colour. All that I can say is that you will not regret reading THUG. It’s characters, plot, flawless writing, and message make THUG a stunningly dynamic, engaging must-read for everyone all over the world. 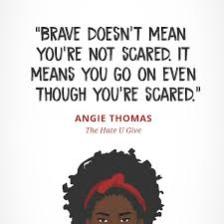 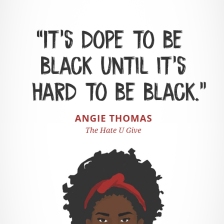 Please check out the Black Lives Matter website, twitter, and consider donating to them if you want to provide any financial contribution to this review. Keep tweeting, keep amplifying, keep speaking out about these injustices.

4 thoughts on “Book Review: The Hate U Give | An outstanding modern day classic”