Troy: Fall a City has been on the lips of many people since its first episode aired on the BBC on the 17th February 2018, but sadly not everything that people have had to say about the show has been positive. To be honest with you all, I loved this show and part of what I loved about it was the thing that the show has received the most criticism over – its diversity. 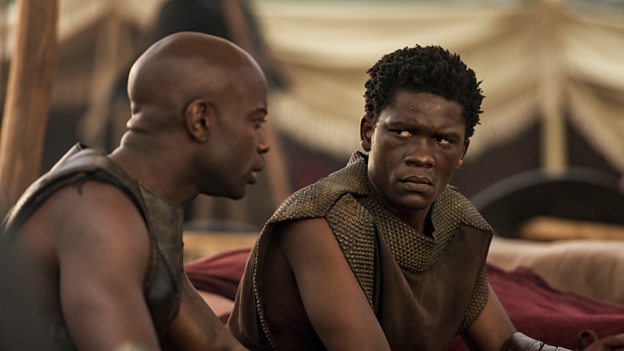 This is the first ever adaptation that I’ve ever seen that actually cast black actors as main characters and didn’t shy away from depicting the relationship between Achilles and Patroclus. Too often adaptations err on the side of one or the other; either you can have black actors in main roles or you can have them be queer but you can’t have your cake and eat it. Troy doesn’t force this ultimatum upon on us though. The casting of David Gyasi as Achilles and Lemogang Tsipa was an excellent choice and both actors really did the characters justice. There are also a number of other actors of color in the series including the ever wonderful Alfred Enoch as Aeneas, Hakeem Kae-Kazim as Zeus, Shamilla Miller as Athena and David Avery as Xanthius.

“As you enter the world of myth you have immediately a wonderful freedom,” he said. “I understand that for certain people, probably mainly in Greece, there is a national idea of Achilles. I personally think that they just have to accept that we are looking at this myth, and we had the freedom to cast it as we have.”

The fact that viewers who claim that there can’t be black people in the show because it’s not historically accurate but seem happy to have Gods and Goddesses walking among humans is absolutely laughable and, sadly, not uncommon in this day and age.

Putting the diversity debate aside, for now, I honestly loved the entire series. Usually, I get really bored of having to wait each week to watch an episode but tuning in for Troy each week always had me excitedly looking forward to each new episode. I thought that the pacing and writing across the 8 episodes were excellent, even though I knew the story of the fall of Troy and what was coming. I loved being able to see the perspectives of both the Trojans and the Greeks, rather than only getting one side or the other as is often the case when we want there to be a “hero” and a “villain”. Instead, Troy offers us characters who are morally gray, well-rounded and incredibly well acted on both sides of the war. We don’t just get to witness the wrath of Menelaus and Agamemnon or Achilles’ rage, but we also get to experience things from the perspectives of the Trojans who put between a rock and a hard place thanks to Paris’ decisions concerning Helen. I think that by giving us both sides of the war, it provided a really complicated and intriguing story rather than one that has been retold time and time again.

Of course, like many Ancient Greek stories, Troy is filled to the brim with violence and sex. Troy doesn’t hold back in this regard or sugar-coats the way that some of the women, such as Cassandra of Troy or Briseis after she is forcibly taken by Menelaus, are treated, so if you find scenes like that difficult to watch then obviously bare this in mind before launching head first into the series!

This is definitely an adaptation that I would highly, highly recommend though especially to others who love adaptations about Ancient Greece and Greek mythology. Also, on a happy ending note, after tweeting my support for the show I got a really lovely tweet back from David Gyasi (Achilles) thanking me for my kind words which have made me eternally happy

You can find Troy: Fall of a City on Netflix, Amazon Prime and available to order as a DVD box set. While we sadly won’t be getting any more of Troy, the ending of the series focuses on the experiences of Odysseus, potentially hinting at a BBC adaptation of the Odyssey. YES PLEASE. I will be here eagerly awaiting this.

Have you seen Troy: Fall of a City yet?
What did you think of it?
Hope you enjoyed my first ever What’s on the Box ❤